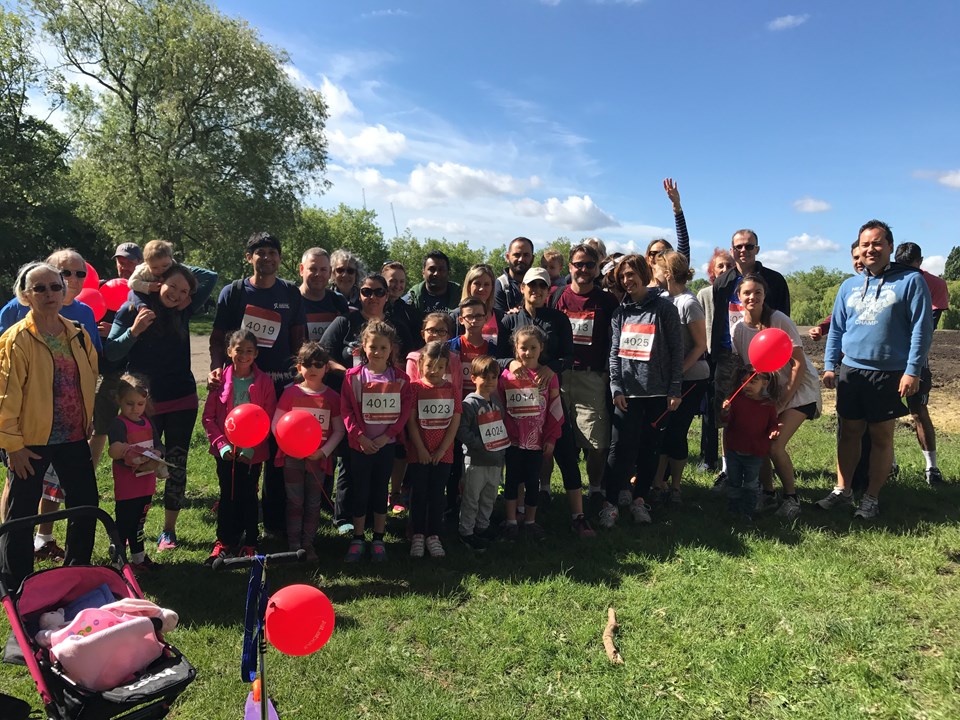 Fighting for every heartbeat: twenty years on

Twenty years and twenty kilometers. For the 20th year in a row, our very own Chrissie Mullings Lewis organised a JHT team to participate at the Hampstead 4 Hearts walk. Chrissie personally completed a 20k run on the day in recognition of the 20th anniversary of her team’s participation. Amazing work Chrissie! Congratulations.
Donations and sponsorships are still rolling in for her fundraising page, so there is still time to support! With Chrissie’s drive and passion, it’s no wonder that she was named PT of the year at last week’s Staff Oscars.

Sunday 21st May 2017 Yey! The sun shone, we had great weather for our 20th anniversary year and a great turn out! We met from 9.30am at the BHF tent on Hampstead Heath. Our team was made up of 58 Entrants comprising all ages & fitness levels,  plus 2 canines. Everyone completed a minimum of 5k up to 20k. The course was slightly different from previous years due to the alterations on the Heath. There were medals & face painting upon completion. Everyone  had a fabulous time! Final Sponsorship total to come we hope that will be fabulous too! Well done too everyone, participants & volunteers! 😘
Our Event Back Story:- 1997 – 20 years ago I took 3 people I trained to this event for the first time. We found it fun, enjoyed running the 5k/3mile course on the Heath and liked that the event is open to all ages. We also felt that the BHF being the major contributor to research into heart disease was a very worthy cause. We’d all had relatives or friends with heart or circulatory issues. (I sadly lost my brother unexpectedly to a heart attack age 37)
After that first year I started to encourage even more people to participate and now generally field a team of between 50-60 people raising on average over £5,000 pounds.
On a personal note until 2001 I always ran the course. But in December 2001 I was involved in an accident, which resulted in back surgery, I was bed bound for most of 2002. By 2003 I was mobile again but had very limited walking ability, my goal was not only to be able to walk to the Heath from the Armoury but also to try to walk once round the course. It took until approx 2007 before I could run a bit of the course again. I have used each year as a marker as to how much progress I have made. This year as its our 20th Anniversary I will aim for 20k and will do it in memory of my father Roy Mullings who passed away earlier this year age 90.
Back in 1997 there were far fewer fun runs and walks than there are today. I hope we will continue to support BHF Westminster Branch Hampstead 4 Heart event for another 20 years ; )

‹ An Award Winning Partners...
A Heart-y Partnership - B... ›
Back to main news page