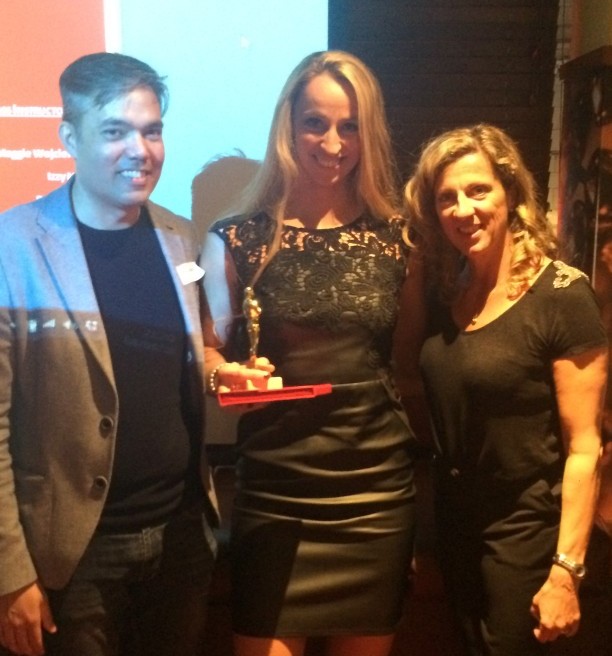 Jubilee Hall Trust (JHT) held its annual Staff Oscars event on Friday 8th May at Grosvenor Casino in Leicester Square. The evening was a great success, with a high staff turnout to hear special guest speaker, former athlete, Sally Gunnell tell her story. Sally, appearing as a Matrix Fitness ambassador, won the gold medal in the 400 metre hurdles at the Barcelona Olympics in 1992, and talked about the very different world of athletics in the eighties and nineties.
But the real stars of the show were the employees, who helped celebrate a year in which three out of four of the centres had smashed their financial targets and the charity had received more than 250,000 visits to the centres and programmes, with 13% of these from concessions and disadvantaged groups.
Winner of the Class Instructor of the Year was Spinning Teacher, Rebecca Davis, described by members as: ‘Inspirational! and whose classes were running at an average 90% full for most of the year. Young Staff Member of the Year, was a new category and went to Jubilee Hall’s apprentice, Daniel Hearn, who was singled out for praise in the user survey as: ‘always offering tips and guidance’ and ‘a great guy!’
For the main award, the Runner Up was Westminster Gym’s Daniel Marshal, who had ‘consistently gone above and beyond’ and had helped to maintain a great service at the gym during the recent refurbishment. Winner of the Staff Member of the Year, was  Anna-Maria Bodzas from The Armoury (pictured centre), who was mentioned in the Member Survey, an incredible 19 times! Described as: ‘just superb’; ‘such a committed and lovely person to interact with’ and ‘she always helps my partner who has MS. She is awesome!’
The awards – Red Letter Day vouchers, as well as the much coveted ‘Oscars’ – were presented by Sally Gunnell and JHT Chairman, Steve Cabrera.