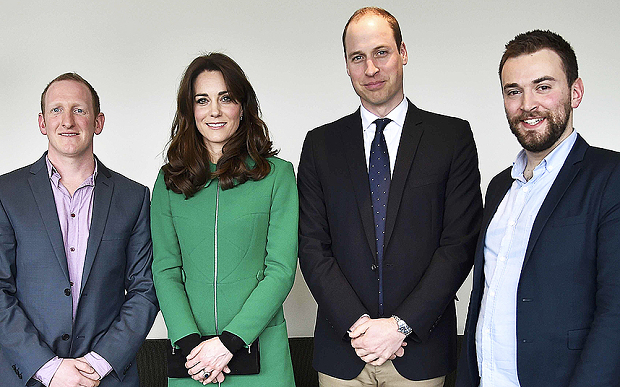 Former Jubilee Hall Fitness Trainer, Neil Laybourn (left), joined the Duke and Duchess of Cambridge and mental health campaigner, Jonny Benjamin, yesterday in a bid to help cut suicide rates amongst young people in Britain.
Jonny started the #FindMike social media search in 2014 to find the unknown passer-by who stopped him leaping to his death from Waterloo Bridge in central London six years earlier. Mr Benjamin, then 20, had been diagnosed with schizophrenia and said he felt his life had hit “rock bottom” before the kindly intervention of a stranger, later identified as Neil Laybourn, when the search went viral.
Prince William and Kate have been promoting mental health issues for some time and have carried out private and public engagements to highlight the help available for those who threaten to take their own lives. The royal couple met both men at St Thomas’ Hospital, where Mr Benjamin was treated after he threatened to take his own life, and later joined them and a group of young people to watch the documentary film which was made about Neil’s ‘rescue’ of Jonny and the subsequent events .