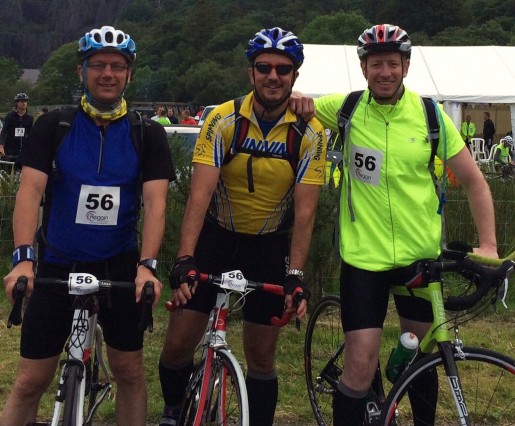 On Saturday 14th June, a 3-man team comprising Jubilee Hall Trust CEO, Phil Rumbelow, Operations Director, Jon Giles and the Managing Director of M Fitness, Harry Harris, took on the Snowdonia Charity Challenge. The task was to cycle 40 miles of hilly North Wales terrain, climb Snowdon on foot and canoe across Lake Gwynant in a day!
The team set out just before 8am and completed the tough course in 7 hours and 8 minutes, placing them a very creditable 14th out of 82 teams! More importantly, they raised over £2000 between them for the Regain charity to help improve the independence of all British men and women who have become tetraplegic as a result of a sports or leisure injury.
Phil said:
‘We cycled London to Paris and raced the Scotland Coast to Coast last year, so we needed a challenge to focus on in 2014. The training we did at Jubilee Hall gym certainly paid off, esppecially Les Mills Body Pump, which built up our leg muscles, and the GRIT classes which taught us to battle on when near exhaustion!’
Well done guys!

‹ Getting ready to go Footb...
Users drive re-investment... ›
Back to main news page